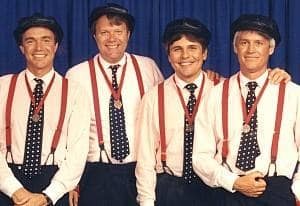 Voters made 139th Street winner of the Legacy Quartet Championship (LQC) top among 20 video contestants in the Society’s celebration of the best that never won.

The 139th Quartet, although never winning gold, were among the most popular and influential quartets in Barbershop Harmony Society history. Winning 8 medals, they were a constant fixture at International contests, with a repertoire of catchy Tin Pan Alley and 1920s tunes that often challenged the contest rules of the time.

To some, they are more famous for the lore surrounding an International contest they missed rather than the many in which they participated. After placing 2nd in 1977, they were contacted the following spring by someone who was scheduled to be an Arrangement Judge at the 1978 contest. He indicated to them that if they sang one of their famous songs, "Don't Put a Tax On The Beautiful Girls," they would be penalized and/or disqualified for singing the altered melody, as it was not allowed at the time. The quartet decided to boycott the upcoming contest.

After discussion with then Arrangement Category Specialist, Ed Waesche, it was determined that the song was allowable and the threatening judge was informed of that fact. The quartet was prepared to return to contest, but lead Jimmy Meehan was still upset that a judge would make such a threat. The rest of the quartet decided they wanted to compete, and told him that he was outvoted. In response, he quit the quartet. They missed the 1978 contest, brought newly relocated Larry Wright into the fold, and the rest is history.

The quartet was very influential in many other facets of the hobby we enjoy today:

A record 17 times in the Top 10 and ever a crowd favorite for their young, brash, hip style and songs. 139th went through four leads. The FWD quartet earned two silvers among their seven medals before finally retiring in 2018.

The 15-year gap between their first and last medal remains a record, including a 13-year gap between silvers. Jim Kline won another silver with Gotcha! in 2003, 13 years after 139th Street's last silver.

Other quartets receiving honors were:

The Legacy Quartet Championship was an unprecedented virtual quartet contest created to determine the best never-to-win BHS quartet. All of these newly available virtual performances were presented FREE to watch on the Society's YouTube channel.

For a full immersion experience, patrons had the opportunity to purchase a ticket which allowed them to serve as judges to pick the winners. The rankings from ticket holders determined which quartets made it to the finals and what quartet would ultimately be deemed the winner. Ticket holders also received exclusive access to an interactive chat experience of their choice, hosted by BHS historians, judges, coaches, and gold medalists.

This was a truly collaborative project, made possible with funding from all 17 Districts and generously supported by volunteers in the Contest & Judging community and the Association of International Champions.

Look for a feature article in the November 2020 issue of The Harmonizer.