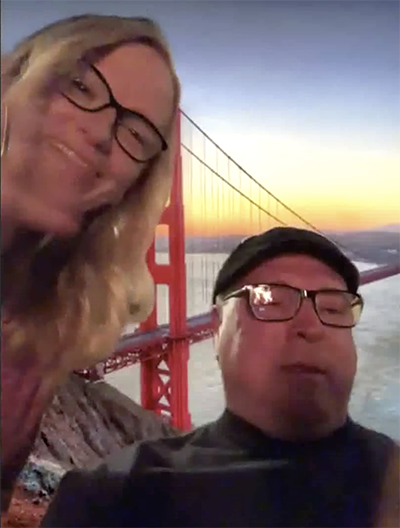 Back in 1969, the Far Western District Hall of Fame Award was conceived to honor the all-time greats of the District. Those who have unselfishly, and with dedication and devotion, performed through the years in the District, Society and International arenas have been awarded this distinction. Before I proceed, allow me to introduce the HOF members in attendance:

Whenever a nominee is selected for induction into the Hall of Fame, his award is traditionally presented at the Spring Convention, usually in March. However, with the interruption of our normal activities, that convention was cancelled in 2020 which made a presentation to the 2019 recipient seemingly impossible. I was fortunate enough to be that recipient but the HOF Committee needed to find a creative manner by which to present the award. Using the leadership skills that helped land them in the HOF, they decided the best way to do this was on a Zoom call, something that we’ve become all too familiar with. But the committee went even further when Richard Lund, Patsy, Chuck Hunter and Pat appeared on my doorstep on July 1, 2020. They started a Zoom call and made the presentation with the remaining HOF members on the call. I was invited to say a few comments, and after my heart beat slowed a bit, I said how humbled and honored I was to be included with those who were in the Far Western District Hall of Fame.

Therefore, by HOF guidelines, I’m the chairman for this presentation; once again brought to you by Zoom, and the Hall of Fame committee who have Zoomed in for this event.

The incoming recipient has been very active in barbershop activities throughout his membership in the society, both in choruses and quartets. He’s held musical and administrative roles and always performed at the top level.

Our recipient is a dedicated family man with a musical family. He’s a man with an outstanding work ethic and dedication to whatever task he takes on. He has helped barbershoppers worldwide through high-level instruction, coaching and performance. He is highly respected throughout the worldwide barbershop community as a strong leader. He is a perfect example of what a FWD Hall of Fame Member should be.

If that isn’t enough to convince you of his qualifications for this prestigious award, he’s a long-time member of the Masters of Harmony chorus, having served as section leader, quasi Assistant Director and music team member. He’s the former Musical Director of the Orange Chapter. He’s a two-time International Quartet Champion, a Chorus and Quartet coach, and Certified Judge.

He stepped into a leadership role, making a significant contribution to the Contest & Judging Committee by turning a challenging transition into a successful endeavor. He is the type of individual who would step onto the stage in a commanding manner to accept this award and his voice in accepting this award would command everyone’s attention. However, he’s a giant of a man with a teddy bear heart.

Brett, the Zoom microphone is yours.