Sowing Seeds of the Future and the Barbershop Style

The weekend of February 12, 2011, the Masters of Harmony and the Southern California Vocal Association co-sponsored the 11th Annual Young Men's Harmony Festival. It was attended by 195 young men from 30 high schools and one middle school throughout Southern California, and the feedback from students, parents and teachers indicates that this was the best festival ever. About two-thirds of the attendees were first-timers, and the other third were repeat attendees from previous years.

The day started with introductions and warm-ups, followed by a demonstration of the barbershop style with all of the members of OC Times singing different voice parts than they usually do (except for Sean Devine, who apparently can only sing lead).  We then ran through all of the songs, and we were pleasantly surprised with how well they sounded, compared to the same time at last year's festival.  The young men were better prepared than previous years, and their vocal quality was significantly improved.

For lunch, we brought in 550 Arby's Roast Beef sandwiches, and they were gone in minutes.  After lunch, we showed the "Masters Making Men Making Music" video that Gary Stone prepared, and it was a real hit. We then broke into section rehearsals, and OC Times and other MOH men helped the young singers to work through some of the more difficult parts of the songs. When we reconvened on the risers, the improvement was obvious. I don't know what magic happens during those section rehearsals, but I know that the young men were thrilled to work with OC Times. 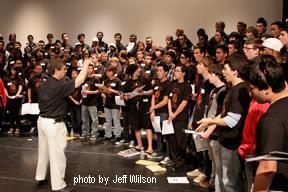 Masters of Harmony in rehearsal

During the afternoon, we added some simple choreography to "Coney Island Baby" and continued to refine the songs. We dismissed the young men for dinner at 5:00pm, and the Masters of Harmony took the stage to warm up and rehearse. The youngsters also changed into their performance attire, complete with red or blue bow ties and cummerbunds that were expertly packaged for each school by Jackie Palmquist. They joined MOH on stage to rehearse "Fun In Just One Lifetime" and "America The Beautiful/Overlay".

The evening show featured the young men's chorus, performances by groups from Patriot High School and Irvine High School (where the choral director is Tina Peterson, wife of Dr. Chris Peterson) along with OC Times, Tenacious Q, Masterpiece, and the Masters of Harmony, culminating in a combined finale with 275 singers on stage for the combined numbers, both of which received standing ovations from the appreciative audience of parents, families, teachers and friends. There were even several school principals in attendance. This year's event brings our eleven-year total to well over 2,500 students who have participated in one or more of our festivals—quite an investment in our future!

We were fortunate to have a number of talented men joining me as clinicians and directors, including Dave Tautkus, Rob Campbell, and Adam Scott from the headquarters office of the Barbershop Harmony Society. They did a great job working with the young men, and we appreciate their talent and dedication.  All of the MOH men did an equally "masterful" job of providing positive role models for the young singers, and demonstrated that singing can and should be a life-long recreational activity.

Although we received 258 registrations for the event, the actual attendance was lower this year, partly due to budget cuts for transportation at the schools and the unexpected date change for the festival, which conflicted with other school events. Nevertheless, the young men who attended had a peak musical experience and a great time.