Jordan Johnson, director of the Gold Standard Chorus,
rehearses the finale song, Home on the Range.

Eight high schools and two colleges sent their choruses to sing their hearts out at the eighth annual Sing for Your Life in Santa Cruz's Civic Auditorium (Nov. 6/7). This youth outreach program began eight years ago with one school sending its chorus to sing on a chapter show.

Since then participating schools have received an average of $848 each time they performed. In the previous seven years, shows produced by the Gold Standard Chorus raised over $34,000 to support vocal music in the county's schools. 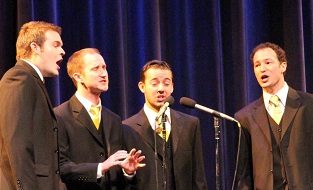 This year, headline guest quartets Vagrants (2009 Collegiate Champions, with David Rakita subbing for Jonny Tillery) and Vogue (Sweet Adelines Rising Star Champions 2010) inspired the student singers with their chord-crushing delivery. Every member of the Santa Cruz chapter is glowing from the success of the weekend.